What is male sexual entitlement?

Graham Goulden is a former police officer of 30 years’ service, including eight years in the renowned Violence Reduction Unit in Glasgow. He now specialises in tackling men’s violence in his role delivering leadership and bystander training to men across education, law enforcement and other areas, nationally and internationally. Here, he asks the question, what is male sexual entitlement and why is it an issue?

As a 50-something year old man I have shared many of the pressures that young men face. Those pressures come as part of the package when guys like us follow what is seen as “being a man”.

As a father of daughters, I’ve also been exposed to the impact of male sexual entitlement. In her first year at university, one was attacked by a man. At first, I found myself minimising this, saying, ‘thankfully she was with a friend, and they managed to get away’. However, I’ve learned this response was driven by my own male entitlement.
Male sexual entitlement is the belief that men are owed sex on account of their maleness. Society normalises this message all the time. While the idea of going out on the ‘pull’ or ‘picking up’ women may be OK in a consensual situation, we know that, if we’re honest, for many young men, it’s considered a game. But often games involve winners and losers.

If we really want to wipe out rape culture and reduce sexual violence, we need to understand how male sexual entitlement negatively impacts everyone, men included.

All these normal behaviours seem harmless when looked at individually. Surely the online world is harmless? But they are symptoms of a wider cultural attitude that values male sexuality and expects female sexuality to exist for male pleasure.

Male entitlement is on open display in the real world too. It’s in the way women are told to “smile” by complete strangers, it’s in the cat-calling, the harassment. Examples of sexual assault are often dismissed simply as “groping”.

What’s the cause of men’s violence towards women, we ask? The answer is right in front of us. The violence is a result of men thinking they are entitled to woman’s bodies and, in cases of domestic abuse, men’s need to control women.

The attack on my daughter made the issue very personal. Behind the statistics of sexual violence are women and men who we know, we care about and love.

Yes, women can be violent too. But they do not, in large numbers, sexually assault or harass men just because they’ve been rejected. This is not an attack on men but a plea for help. 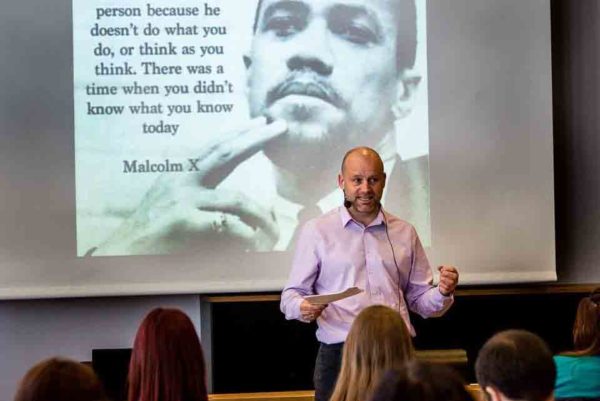 So, what can men do to address male sexual entitlement?

Be aware of the physical space you take up in public: on transport, in cafes and shops. I’m guilty of waking up on a train, only to realise my legs have taken over some of the space belonging to my neighbour. I simply apologise and reposition myself.

Demonstrate clear consent. Need to move past a woman in a public place? Don’t just put your hand on her back. Ask if it’s ok to pass. Ask before you hug someone.

Why am I speaking? I’ve been there, at work or in the pub, the one first to respond to questions, the one dominating the conversation. Yes, this happens in all groups, but I’ve noticed far more men are this way than women. It’s not just the physical space to which men tend to feel entitled.

Become an ally and work to end street harassment. A simple way to do this is not to harass women on the street yourself. Most men get this. Aside from refusing to participate in street harassment, get used to challenging the others who do.

Look at your own behaviours around women. It all starts with you. Most men don’t look in the mirror and see an offender but most women I know have been sexually assaulted at some point in their lives. Never assume she’s thinking what you’re thinking.

Don’t talk trash about women. It’s okay to talk about women you like with your friends. But talking about them in a way that demeans them contributes to a culture that harms women. You might not sexually assault women, but the way you speak might be giving permission to a man who does.

Talk to other men about male sexual entitlement. Don’t be surprised when you find friends who support your views. I feel many men are wanting to talk about this. Be the first one who does.

No, not all men are abusive but, yes, all women, many men and all children, have to deal with the consequences of male entitlement and its link to violence every single day.

Finally, we cannot expect women to be the only ones leading men to change. You can be part of the solution too.

What are men saying about THAT GUY?

When it comes to tackling men’s violence, it’s the little things that matter, says expert
The cookies we use allow us to monitor our web site traffic and do not give us access to your computer or provide any information about you. Please click "Accept" to continue.
Accept