Old Firm Facts: Don’t be that guy just because you support a certain team

With his podcast and over 70,000 followers on his @Oldfirmfacts1 Twitter account and regular widely-shared columns, Adam Miller has become a prominent voice in Scottish football. Writing for THAT GUY, Adam looks at how men can make the world of football a safer place for all women.

Chances are, you’ve heard that at a game. You might even have sung it yourself.

If we were asked to explain why, we’d probably say ‘It’s just a bit of harmless banter to wind up an opponent’.

The problem is, it’s not just harmless. Our intentions might not be any more vicious than putting a rival footballer off during a game, but we would do well to consider the impact of what we’re singing.

This kind of chant trivialises sexual assault, and weaponising it against a footballer feeds a culture in which the victim’s experience is given less consideration than how the allegations can be used to score points, gain cheap laughs or accumulate retweets.

It’s very easy to send a righteous tweet about Other Blokes, or launch into a rant about Those Guys while three pints in, and calling people out on harmful behaviour is always a good thing. At the same time, very little changes without people reflecting on their own behaviour, and that’s what we as men need to get better at.

When it comes to attitudes and language around male sexual entitlement, football is an area in which there is significant room for improvement. We all know plenty of women who attend matches and who engage in Football Twitter, and most of us would be mortified if we realised that we’d made it an awkward or unpleasant experience for them.

And yet, for many women, football is an uncomfortable environment. 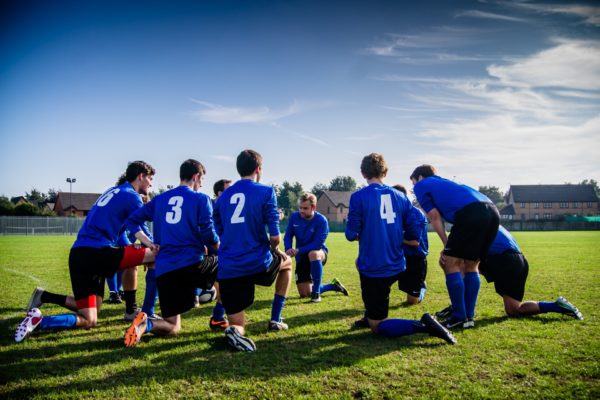 Let’s say a high-profile player is accused of sexual assault this week, but is allowed to continue playing while the allegation is investigated. If we’re honest, we all know how that situation will play out among fans.

With no concern for the impact of their words on any survivors of sexual assault unlucky enough to hear or read them, we trivialise, deflect and diminish. The woman becomes a victim twice. After suffering the initial assault, she is now subjected to victim-blaming and abuse from the player’s fanbase.

If it’s a reserve player with three first-team appearances we’ll implore our club to make an example of him. If it’s a loan signing who’s been brought in as cover we’ll demand the club terminate the deal. And rightly so.

When it’s a star striker or an inspirational captain, though, there’s always a ‘But’.

‘But she would have led him on’. ‘But how much money is she getting out of this?’. ‘But she just wants her 15 minutes of fame’.

Even when we’re not victim-blaming, we’re putting our fingers in our ears because engaging with the allegations would mean accepting the possibility that our heroes are flawed. That, however, is how superstars can admit sexual assault and continue with little to no impact upon their earnings, reputation or career. The victim, meanwhile, has her motives questioned and name continuously dragged through the mud, while becoming the target of online abuse.

Too many of us place more emphasis on how the allegation impacts and reflects upon our football team than on the experience of the victim. It’s ‘Believe Women’, not ‘Believe Women Unless It’s A Guy Who Plays For My Favourite Football Team’.

Our language in these situations doesn’t just affect the victim. It affects every woman hearing it. It tells them that we haven’t got their back. It makes them feel that a traumatic, life-changing experience for them can be reduced to a tool for mocking other football fans. It says that, if they are the victim of sexual assault, they might not be believed and they might be blamed.

Talented people can do terrible things. A footballer might have scored a hat-trick in a cup final for your team, but that has no bearing on whether or not they have sexually assaulted a woman.

Every time we ignore an accusation about a player because it’s inconvenient, call him a ‘GOAT’ or just fail to subject his behaviour to the same scrutiny that we would anyone else’s, we feed the culture of male sexual entitlement.

It’s a culture that demeans women. That treats victims as a punchline, or as a stick with which to beat opposing players or clubs and, ultimately, dehumanises them. Once someone’s dehumanised, we can justify treating them inhumanely. If we see women as mere objects, it becomes easier to excuse our behaviour towards them and justify it to ourselves.

When male sexual entitlement is allowed to flourish, men are more likely to commit sexual offences. The language we use and the attitudes we display play into that culture. As men, we need to look at our own behaviour as well as calling it out elsewhere.

In the world of football, we need to stop viewing sexual assault allegations through the prism of our favourite teams.

Real men don’t cat-call and grope. Real men don’t guilt-trip, neg or coerce. And real men don’t diminish the trauma of the women around us by using it as a punchline or downplaying it because we happen to support a particular football club.

So what can we do? As men, how do we go about making football a safer and less toxic environment for women?

We can stop singing about sexual assault at matches. We can stop victim-blaming on social media. We can accept the fact that occasionally our heroes on the pitch turn out to be reprehensible off it.

We can ask ourselves if we’re guilty of any of the behaviour discussed here, and consider how that behaviour might have affected women. For instance, if you’ve ever tweeted about a woman who’s accused a footballer of sexual assault and suggested that she led him on, was ‘fame-hungry’ or should be grateful, that tweet might have ended up on the timeline of a sexual assault victim. As a result, she may feel less confident about coming forward, or have the trauma of her assault reinforced.

That tweet might also show up on a young, impressionable man’s timeline, resulting in him feeling like sexual assault is the women’s fault, or that he’s entitled to do as he pleases with a woman’s body.

It’s unpleasant to be asking these questions about ourselves. No-one thinks of themselves as a misogynist, or as someone who makes women uncomfortable. Misogyny’s what the old, ruddy-cheeked guys at work do. You’re different. You know better.

The fact is, though, scrolling through Twitter or listening to chants at particular matches tells you misogyny is still a major issue in football, and many of us are playing a part in it.

Change isn’t supposed to be comfortable. It has to be awkward. It requires self-examination and difficult conversations. As men, we need to be asking those uncomfortable questions of ourselves.

This isn’t about ‘cancelling’ anyone. If you’ve sent that kind of tweet or sung that kind of song, no-one’s suggesting you be publicly flogged and eternally shamed.

It’s about recognising how we as men contribute to a culture that degrades women. A culture that makes it easier for men to take advantage of women while fooling themselves and others into believing that their actions are harmless, and harder for women to gain support in the aftermath of those actions.

The vast majority of us will not commit a sexual assault, but if we’re honest with ourselves, most of us will have at some point overlooked, excused, deflected, trivialised or in some way perpetuated unacceptable behaviour towards women.

The next time a footballer is accused of sexual assault, remove your footballing allegiances from the equation. The safety and wellbeing of women is so much more important.

Don’t be that guy.

10 video game heroes who have been THAT GUY

Do you recognise yourself in our 60 second film?
The cookies we use allow us to monitor our web site traffic and do not give us access to your computer or provide any information about you. Please click "Accept" to continue.
Accept